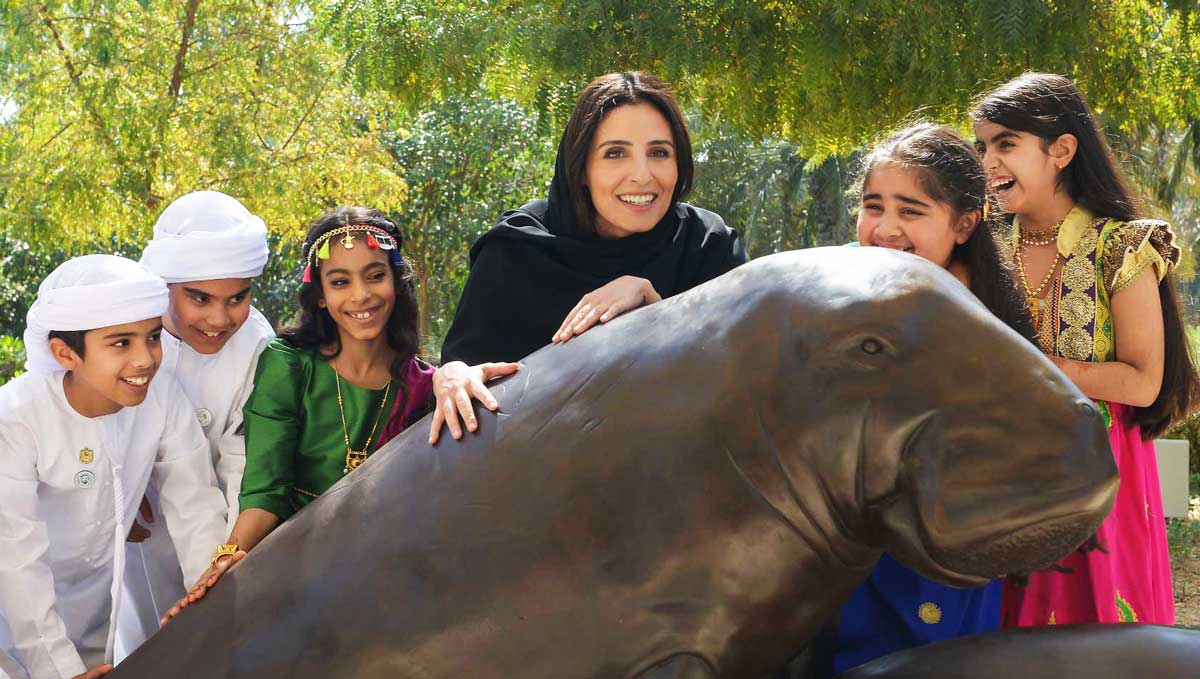 Razan Al Mubarak was elected President of the International Union for Conservation of Nature (IUCN) in September 2021. She is the second woman to lead the organization in its 75-year history and its first president from West Asia. She also serves as UN Climate Change High-Level Champion for the leadership team of COP28 UAE, which will take place in Dubai from November 30 to December 12, 2023.

For more than 20 years, Razan has played a vital role in guiding the United Arab Emirates toward a more sustainable future while spearheading progressive environmental protection, species conservation, and climate action across West Asia and globally.

Her diverse experience leading the largest environmental regulatory agency in the Middle East, an international philanthropic organization supporting species conservation projects worldwide, and an NGO focused on citizen engagement earned her recognition as one of the top 100 Young Global Leaders by the World Economic Forum in 2018. Razan is currently one of three candidates running to be elected president of the International Union for Conservation of Nature for a four-year term.

When she was appointed managing director of the Environment Agency - Abu Dhabi (EAD) in 2010, Razan became the youngest person to lead an Abu Dhabi government entity and one of the only women to hold such a position. Under her guidance and leadership, the government agreed to double its protected wildlife areas and adopt the region’s first carbon targets: a reduction of greenhouse gas emissions by 42 percent by 2030. She has also overseen one of the world’s most ambitious mammalian species reintroduction programs: the breeding of captive Scimitar-horned oryx in Abu Dhabi and reintroducing them back into the wild in Chad, thus seeing a species that is listed as Extinct in the Wild now increase its numbers in its natural habitat. Under her guidance, the EAD has established global partnerships like the Eye on Earth environmental data initiative, convened four meetings of IUCN Species Survival Commission since 2008, and hosted one of the Convention on Migratory Species’ two offices.

Razan is also the founding director of the Mohamed bin Zayed Species Conservation Fund, helping to build the organization into one of the world’s largest philanthropic foundations supporting direct species conservation. Since its inception the Fund has supported more than 2,000 species conservation projects in over 160 countries, bringing many species back from the brink of extinction.

She began her career in conservation in 2001 when she helped establish Emirates Nature, an NGO associated with the World Wildlife Fund. As its managing director, she has spearheaded initiatives to protect the UAE’s coral, conducted field surveys that led to the establishment of the country’s first mountain national park, and created the framework and culture to protect nesting and migrating sea turtles.

Within the UAE, Razan chairs the board of directors for the International Centre for Biosaline Agriculture and is a board member for numerous environmental influencers and stakeholders, including Masdar, a renewable energy company based in Abu Dhabi. Internationally, she is an advisory board member of the Rockefeller Foundation Economic Council on Planetary Health, the Cambridge Conservation Initiative, and the Emirates Diplomatic Academy, and is a board member of Panthera and the Women in Sustainability, Environment and Renewable Energy Initiative (WiSER). A keen supporter of the arts, cultural preservation, and development, she serves as a member of the Board of Advisors to the Abu Dhabi Music and Arts Foundation.

Razan holds an MSc in Public Understanding of Environmental Change from the University College London, UK, where her thesis analysed traditional laws of the sea in the UAE region, and a BA (Hons) in Environmental Studies and International Relations from Tufts University, Massachusetts, USA.

Making an impact: a record of accomplishments.

President, International Union for the Conservation of Nature (IUCN)
The second woman to lead the organization and its first president from West Asia. Areas of focus: nature conservation, protected areas, empowerment of women, youth and indigenous communities.

Razan has been a strong supporter and advocate for IUCN for nearly two decades. Under her leadership, Environment Agency - Abu Dhabi (EAD) became an IUCN Framework Donor and it has convened four meetings of the IUCN Species Survival Commission since 2008. Razan also secured EAD's long-term hosting of the UN-Environment Programme (UNEP) Conservation of Migratory Species Conservation of Migratory Species secretariats for raptors and dugong and, in partnership with UNEP, established the Eye on Earth community to ensure standardized, free and open access to global environmental data. 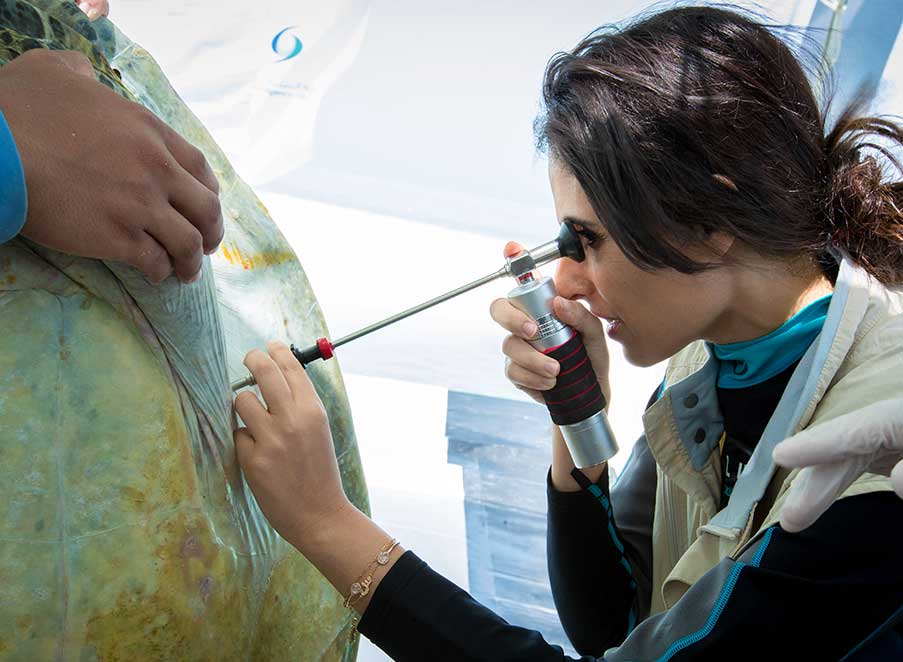 A Lifelong Love of Nature

A love of nature from a young age inspired Razan to study the impact of environmental toxins and then pursue a career dedicated to preserving the world's natural history. At this critical moment, Razan understands that humanity's wellbeing is inextricably bound with that of the world's natural ecosystems. Leading the IUCN is the next step in her lifelong commitment to ensuring that the benefits of the natural world are protected for her daughter and all future generations. 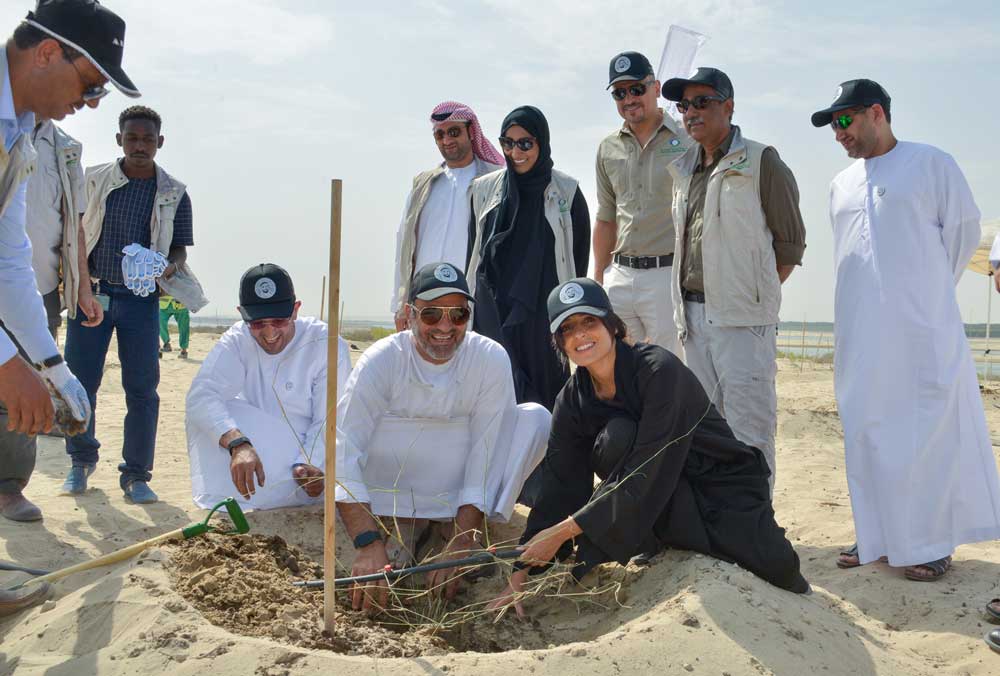 A Next-Generation Leader from a Dynamic Region

Born in 1979, just eight years after the UAE was founded, Razan has seen her small, highly diverse country's population and economy grow by more than 300% in the last 15 years. From its platform as a leading petroleum producer, the UAE is aggressively pursuing its transition to a green economy, reducing the portion of GDP from the oil and gas sector to 13%. By 2050, more than 50% of its energy will be supplied by renewables. Elected IUCN President in 2021, Razan is the first woman from the West Asia region to lead the organization in its 72-year history and its first Arab president since 1978.